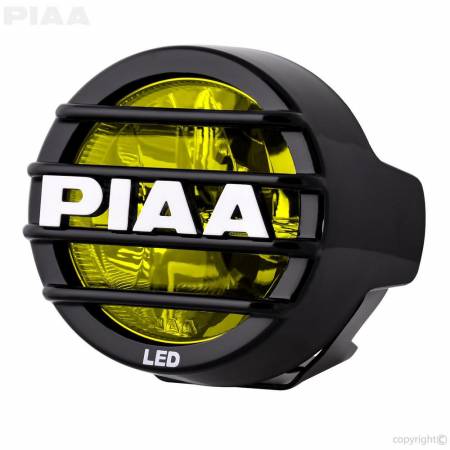 The new PIAA LED (light Emitting Diode) fog light kit offers the beam control of a halogen light with the low power consumption and durability of an LED light. As a light source LED's offer several advantages over their halogen counterparts including very low power consumption, compact size and durability. Unlike most LED lights currently on the market that position the LED aimed straight out forward the 530 lights aim the LED's at the reflector. This new orientation of the light source allows for far better beam control and output than the conventional layout.

In place of a traditional halogen bulb each light uses two LEDs running at 8 watts per light producing a very yellow beam with a color temperature of 2500 Kelvin. LED's with a computer designed multi-surface reflector gives a true high performance fog pattern in a lightweight, durable light that requires a fraction of the power used by a comparable halogen light.

Both series of PIAA LED lamps provide brilliant illumination, but with lower power consumption than conventional LED and halogen lamps. They light the road with brilliant cobalt-blue color that is clearly visible to oncoming traffic, providing an added measure of driving safety. The lamps are compact and durable, with the cast aluminum housings and polycarbonate lenses.

WHAT'S IN THE BOX